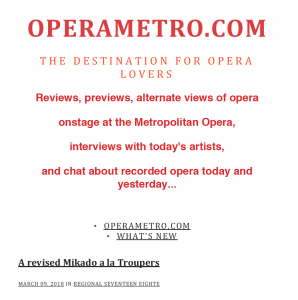 The Troupers Light Opera Company performs Gilbert and Sullivan’s The Mikado on the stage of the Norwalk Concert Hall on consecutive Saturdays, April 14 and 21, @ 2:30 and 7:30 p.m.

It’s a nod to the Company’s long and fabled history in these parts: their first production was The Mikado, performed in 1946. To date, the Company has performed The Mikado eight more times, the last being in 2012.

But this season, 2018, brace yourselves, O faithful G & S fans: The Mikado has been, shall we say, transformed, politically corrected in the face of a rising objection to the opera’s ‘negative stereotypes’ by members of the Japanese-American community on the West Coast. Taking the lead, the Lamplighters Music Theater of San Francisco created a version of The Mikado, catchingly titled “Il Mikado,” set in Milan during the Renaissance, thus cleansing it of any reference to Japan or to the Japanese people; no snap-opening fluttering fans, no three little kimonoed maids from school; similarly, the character names have been transformed to ”Italian” spelling equivalents to maintain the Gilbert’s rhyming patterns. Yum Yum is now Amiam, Katisha is now Catiscia, Ko Ko is Coco, and so on…you’d never know most of the changes unless you looked at the program. The Italian-American community has not as yet weighed in.

OperaMetro chatted with this season’s Amiam, the amiable Brett Kroger, who starred as Josephine in last season’s exquisite H.M.S. Pinafore. I’d like to say we were conversing over an excellent course of Sushi and sake in downtown Stamford, but, alas, both on the go in all directions, I caught up with her by phone during a brief overlap of our windows of time on a rainy February morning. And I also chatted with Frank Sisson, who sings CoCo and is the Company’s President of the Board. I’d like to say that he and I are also at a table in Fairfield, sharing stories of seasons past over a glass of wine, but, alas, he and I are on the phone too.

OM: Pleasure to chat with you, as always, Brett!

OM: Where has the year gone?

OM: Okay, so tell me about this season’s Mikado.

BK: Well for starters, we were planning to do Ruddigore, but the Wall Street Theater, where we did Pinafore last season…

BK: Indeed! Perfect! But they didn’t seem at all willing to negotiate a schedule and give us a price to fit our resources. Since Ruddigore needs a darkened stage to pull off the effects in the Ghost Scene, and ‘dark’ not being an option at the Norwalk Concert Hall, we opted for The Mikado.

OM: And in doing so, ran into another obstacle…

BK: More or less. I mean, we could have done The Mikado in its familiar version, but some of us felt that as long as the Lamplighter version had been created and ran successfully, why not perform it and not risk any unintended offense.

OM: But you’ll agree that The Mikado is Gilbert’s take on the human condition, arguably that in Great Britain in the Victorian era, not “about” Japan or the Japanese per se.* He set the plot in a fairy tale Japan to capitalize on the Brit’s great curiosity aroused by a Japanese exhibition in Knightsbridge at the time, but as in all Gilbert’s plots, the absurdities and quirks of the characters are exaggerations of all-too-human ideas and customs. In addition to this, Sullivan contributed an incredible score. Not a surprise it was an enormous success.

BK: Yes. Well, happily none of the music is touched and most of the dialogue remains unchanged. The Lamplighter revision is certainly doable and, as directed by our new Director Kevin Miller, it’s really a lot of fun.

OM: Thinking back, which is not the same as saying I was there, it’s not the first time G & S has been adapted to the times. By the 1930s the D’Oyly Carte’s standard version of The Mikado had been ‘cleansed’ of an offensive reference. Also in the 30s there were, among others, The Swing Mikado, The Hot Mikado, the Schertzinger film The Mikado with Martyn Green in 1939, The Cool Mikado, a film in 1962, and, in the late ‘80s the English National Opera’s staging of The Mikado by Jonathan Miller, starring Monty Python’s Eric Idle as Ko-Ko. It’s set in British seaside resort in the 1920s, Nanki Poo in tennis whites, etc. Even Miller in an interview says Mikado is not about Japan.

But I digress. Brett, I must say I enjoyed the interesting little details you gave to Josephine’s personality last season.

BK: I enjoy getting deeper into a character’s skin.

OM: Obviously.  So this season what are your thoughts on Yum…excuse me, Amiam?

BK: We haven’t completely staged the second act as we’re talking now.** Our Director Kevin Miller’s underlying message to the cast has been “Have fun! Let’s find the humor in it all!” But also I also want to give Amiam a little more backbone than her former characterizations usually get. Often, I think, Yum Yum, here Amiam, is portrayed as more passive, seemingly just “available” and waiting for a husband. Coco, a lord-high city official and also her guardian, will do, right? Good position. But she clearly doesn’t love him. However, though she’s attracted to Niccolu, she’s hesitant, not completely swayed by a pretty boy who plays a wind instrument outside tea-houses…until, that is, he reveals his secret that he is actually the son of Il Dukado. Now she has a choice. But clearly status is important to her, and she is ambitious as well: in Act II she reveals “I mean to rule the Earth as he sky, we really know our worth, the Sun and I!” She’s happy that she will be marrying Niccolu, even if at the end of the month she will lose him…until, that is, the obscure legal clause is revealed by CoCo, wherein the wife of a man who is beheaded must be buried alive.

OM: It, it does make a difference, doesn’t it?.

BK: It does make a difference, of course!

OM: Well, we’ll see how it turns out. My friend, we look forward to seeing you in Il Mikado.

OM: You are the President of the Board of Troupers, also singing Ko Ko…excuse me, CoCo.

OM: How are you finding the alterations to the text?

FS: There are surprisingly few, apart from the spelling of the names of course, but even they, for the most part, sound the same as the originals. Then, “We are gentleman of Milan,” not “gentlemen of Japan,” not “I seized him by his little pig tale,” but rather “I seized him by the scruff of his neck.” Yum Yum’s “artless Japanese way” is Amiam’s “artless Milanese way,” and so on. The Mikado is referred to as Il Dukado.

OM: You’ve done Ko Ko before with Troupers as I remember.

OM: I remember interviewing her for the paper.

FS: When I say relatively traditional, I changed the lyrics to Ko Ko’s “As some day it must happen…” with references to newsworthy contemporary things like the new Windows 95.

FS: Right, so this time I’ve placed the references in his song to persons in the Renaissance: Michelangelo, the Mona Lisa, Galileo, Columbus,  Henry VIII, Botticelli, Machiavelli, and so on…had a lot of fun writing that. And I found that a “snickersnee,” Coco’s execution sword, is not Japanese at all, but rather of Dutch origin. So that works too.

OM: Give me your take on the political correctness of Il Mikado.

FS: We talked and talked about it and were split pretty much down the middle on whether to go with the traditional Mikado set in Japan or the Lamplighter version set in Milan. We felt that the ‘costs,’ the changes we’d have to make, backlash from purists were minimal and the ‘benefits’ were greater. In addition to eliminating the risk of any cultural offense, we also get a chance to maybe shake it up, put a fresh spin on it, not just ‘another Mikado’. After all, opera productions do this all the time.

OM: Agreed, though usually not with the same intent. I’m with you on the decision. But I also think down the road it’s a slippery slope for the world of the performing arts, even the world of fiction.

OM: I noticed a lot of new stuff on the Troupers’ website.

FS: Yes, Jim Cooper took the time and effort to post programs and photos of all of the Company’s productions since 1946. You can search for artists, directors, conductors, and so on. It’s truly a labor of love to preserve our history in this way and make it available for this generation.

OM: I’m very much looking forward to Il Mikado. See you in April!

FS: We look forward to it.

The Troupers Light Opera Company performs Gilbert and Sullivan’s The Mikado on the stage of the Norwalk Concert Hall on consecutive Saturdays, April 14 and 21, @ 2:30 and 7:30 p.m.

* William Abbott writes in the Troupers’ press release: The irony, of course, is that W.S. Gilbert never intended The Mikado as a satire on Japan, but as a way of satirizing Victorian England.  “I doubt if there is a single joke in the whole play that fits the Japanese,” wrote G.K. Chesterton, “But all the jokes in the play fit the English.”  The pomposity of ancestry-obsessed noblemen, the hypocrisies that plagued Victorian marriages, the foibles of a legal system mired in medieval precedent, and even the British monarchy itself are held up to merciless satire, which is all the more merciless because Gilbert was able to disguise it with a Japanese setting.  Now Troupers will disguise it with an Italian Renaissance setting.

** The time of our interview was late February.

It’ll be loads of fun. Celebrate local opera, especially ‘vintage’ local opera. Think of how much a part of our cultural life the Troupers have been.

See you there. J. 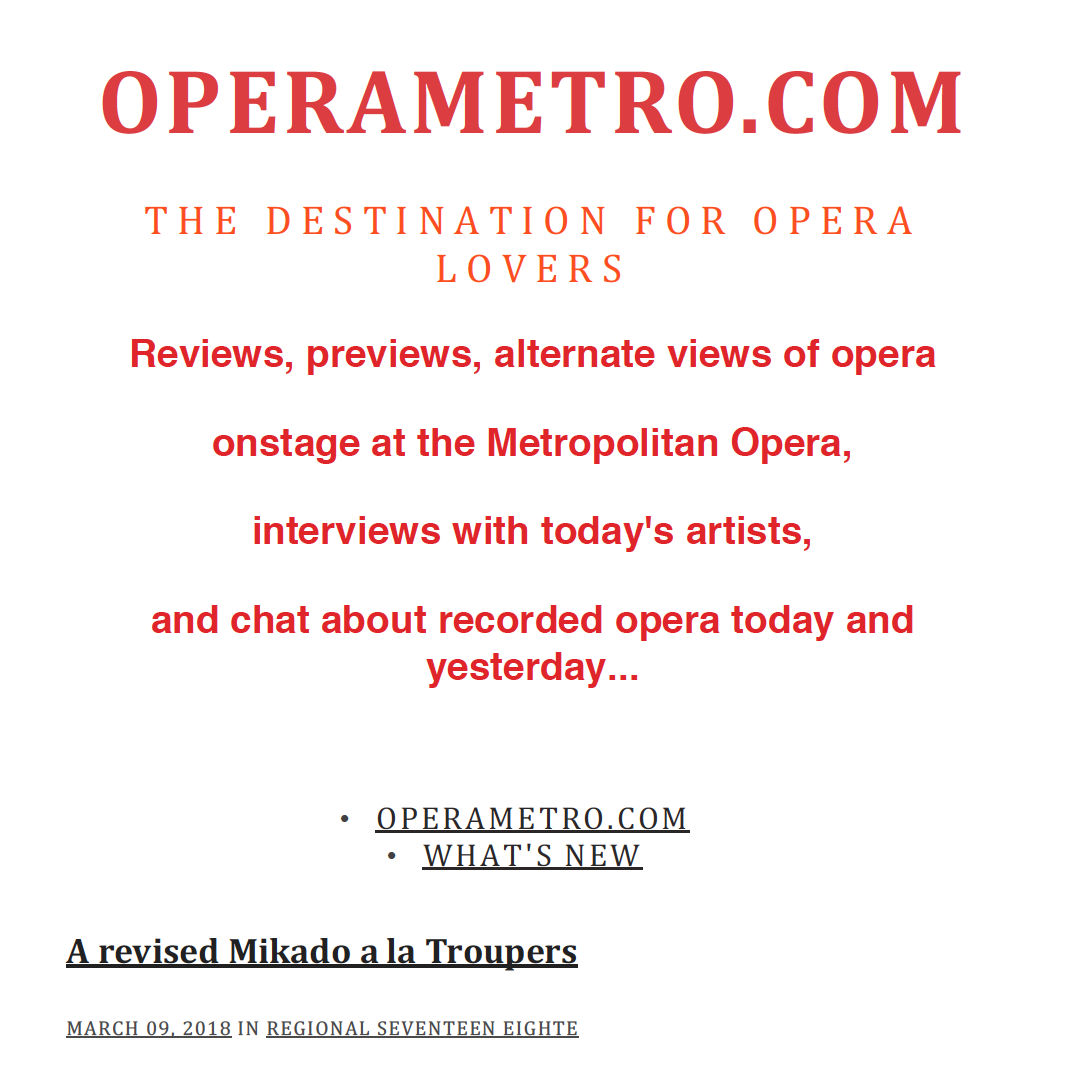