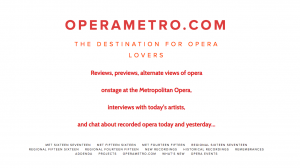 With Brett in the role of Mercury, Troupers Light Opera, November 5-6, 2016

To view on the Opera Metro site: http://www.operametro.com/regional-sixteen-seventeen

The Troupers Light Opera Company has resurrected Gilbert and Sullivan’s Thespis, the first collaboration of the immortal team who, in London during the reign of Queen Victoria, created the so-called Savoy operas, each of ’em a masterpiece of English musical theater. Premiered on December 26, 1871, Thespis is rarely performed these days for two major reasons: it lacks Gilbert’s sure fire creative insight into character and efficient plotting, thus making it neither as interesting nor as satisfying as his later works, and, a far bigger blow, Sullivan’s original score is missing, making any reconstruction of the music a matter of educated conjecture. See OperaMetro’s nearby preview of Thespis for more historical stuff.

Though there are actually several reconstructions of the music for Thespis, Jim Cooper and the Troupers chose the version by Anthony Baker and Timothy Henty. It, like other reconstructions, includes two surviving numbers from Sullivan’s original score, but the duo also rely heavily on Sullivan’s music for his other operas with Gilbert, as well as some from Jacque Offenbach’s Orphée aux Enfers, which had played in London a bit before the premiere of Thespis, but which also pokes fun at the gods on Mount Olympus. An obvious choice and a sound one.

Thespis, in a nutshell: the gods have grown old, they’re tired of ruling, they don’t get no respect, the great days of human sacrifices are over, even animal sacrifices have fallen off, now reduced to (gasp!) preserved Australian beef! Why? They have no clue.

Enter a gaggle of actors who just happen to be picnicking on the slopes of Olympus. The gods decide to do a little market research below while taking a much needed holiday, so they conscript the actors to take their places and duties. No problem, says Thespis, the leader of the troupe, but be warned, the price of failure, Jupiter tells Thespis, is that he “will be constituted as ‘Father of the Drama’ and held accountable for everything that every author may write for ages to come.”

Of course, as do those unfit for any office soon learn, the actors find their charges and duties are not as easy as they appear. A lot of unforeseen complications arise and the actors muck everything up, turning the world topsy-turvy, so to speak. 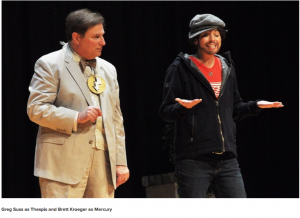 Greg Suss as Thespis and Brett Kroeger as Mercury

Central to the action is the spunky young Mercury, who, as the messenger for the gods, acts as a go-between twixt them and the mortals. It’s a large part, a trouser role originally written for a shapely Ellen Farren, whose tights played much better on stage than her voice apparently. Mercury here is indeed a large part, but happily something of a breakout performance for Brett Kroeger. In past Troupers’ productions, she frequently played just another girl waiting to be wed, like, for instance, Constance in The Sorcerer this past spring. But as Mercury Kroeger has a real chance to shine, especially in the big patter songs and in the prodigious amounts of dialog, which she delivered with cool and panache. Ample in voice, but no tights here: her lithe frame, jeans, sneakers, cap, penciled-in stubble and an overall zip in everything she delivered contributed much to her character’s success. Brava!

The gods were Wendy Falconer as Diana, John Matilaine as Apollo, Rob Strom as Mars, and Bob Scrofani as Jupiter, all interacting as a families often do. They sing mostly in brief duets, trios, or in ensemble; in this production their formal wear while in power is cast off for colorful holiday garb, tie dyes and such, as they relax while the players run the universe. At one point the gods add on an effective disguise.

The mortals are more numerous. Thespis, the show’s other centerpiece, is the Manager of a Traveling Theatrical Company, so naturally he will replace Jupiter. Is not all the world but a stage? The part was originally written as a vehicle for the Gaiety Theater’s leading comedian, one Mr. J. G. Toole, who did not sing much, but who often inserted his ad libs at whim. Greg Suss struts his stuff, playing the leader with élan, fussing, praising, posturing, raving, and hand wringing.

David Richy is Sparkeion, the actor who will take the role of Phoebus Apollo, the god of the sun and day. Richy’s elegant rendering of the song Little Maid of Acadee was quite enlightening, in that it is the only solo number remaining from Sullivan’s original Thespis score. Daphne the flirt, sung by an animated Deborah Connelly, becomes Calliope; Nicemis, played by a new Trouper Anne Collin, becomes the goddess of night. As the plot plays out she is accompanied by Apollo (Sparkeion, remember) at night so the sun’s warmth (but not its light) will fight off the chill.

But here’s one of the rubs in the plot: the reassignment of roles with this transition, actors for gods, causes some interesting problems: you see, Daphne, when a member of the troupe, was engaged to Sparkeion, but he is now Apollo. Daphne, as Calliope, discovers from Lemprière’s Classical Dictionary that Apollo has had relationships, not to say marriages, with at least eight goddesses, including Calliope. So far so good: Thepis (as Jupiter, therefore in charge) concludes that therefore Apollo is her husband. But suddenly Nicemis, now goddess of night, and Sparkeion, as god of day, enter hand in hand, claiming to be married…get the drift? Here is a case unprecedented, for sure!

Pretteia, taken by newcomer Jennifer Wallace, becomes Venus; Wallace also sings the solo Star in the celestial prologue (to Offenbach’s music). Timidon, sung by John Hoover, will be Mars, the god of war; Sillimon, Thespis’s Stage Manager, clipboard in hand, ever on call, is taken by Ty Goff; Tammy Strom is Cymon, the keeper of time; Guy Stretton is Tipseion, the Tipsy One who replaces Bacchus. Bacchus, hey, so he should be a good time, right? But he, alas, has taken the pledge to dry out and only delivers ginger beer to the thirsty on Earth.

Much of the humor of Thespis is broad music hall stuff, to wit, Thespis, in his theater manager mode, waves the gods off with a lower class “Don’t know yah! Don’t know yah!” Though Gilbert wrote pretty some good patter songs and ensembles here, he had yet to perfect the fine art of making his characters inherently funny or absurd and then placing them out of place in the context of time/space, like Joseph Porter, the articled clerk as First Lord of the Admiralty or Ko Ko, the cheap tailor made Lord High Executioner. Such persons are delightfully silly, even without doing blatantly silly things on stage.

Marion Shulman’s direction kept the action moving without pause, but also without any help from the one hundred and thirty, plus or minus seven years, of D’Oyly Carte staging tradition surrounding the characters in the G & S canon. James Cooper conducted and coordinated the singers on stage; Dorothy Kolinsky marvelously played the piano. The sets were minimal, but the costumes were creative.

The Baker/ Henty reconstruction works on two quite reasonable assumptions. First, both Gilbert and Sullivan liked to sneak other people’s music into their shows. Copyright laws being what they were back then, Gilbert got away with setting his full length texts to music stolen from other European composers. And Sullivan often made musical quotes from and allusions to other works for humorous effect. Hence the Offenbach, appropriately Orphée aux Enfers.

And second, that given Gilbert’s subsequent predilection for certain rhyming patterns to his verses, it should not be too difficult to find suitable music from Sullivan’s later scores for the Savoy operas. To B & H’s credit, they borrowed both cleverly and creatively from G & S, such as, for example, the finale of Act I of this Thespis starts with the music from the finale of Act II of Utopia, Limited, then glides briefly into the finale of Act I of The Gondoliers, then concludes, not really paradoxically, with music from The Pirates of Penzance. I also heard snatches or extended patches from Pinafore, Iolanthe, Princess Ida, Ruddigore, The Grand Duke, even Sullivan’s The Rose of Persia and maybe The Zoo.

Gilbert would again use the idea of theatricals replacing monarchy in The Grand Duke, his last collaboration with Sullivan, but at least to me it’s interesting that even as early as Thespis, he’d be exploring the broader question of what might the world be like when run by an idiosyncratic, not to say incompetent person in power? Hilarion predicts that Princess Ida and her women will set the Thames on fire very soon…would you want the Learned Judge to try a breach of contract of a daughter’s marriage?

Thespis was performed at All Saints School, 139 West Rocks Road in Norwalk.

The Troupers will be performing Gilbert and Sullivan’s H.M.S. Pinafore in the spring. Stay tuned.